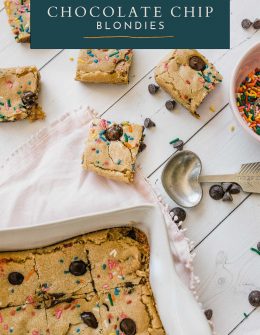 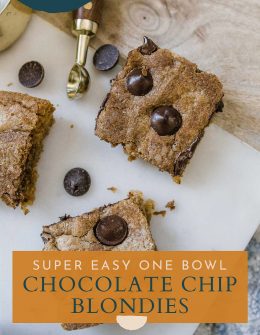 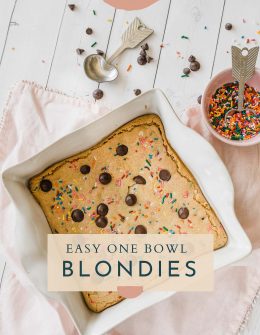 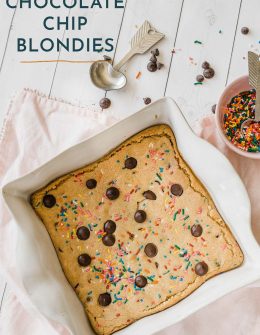 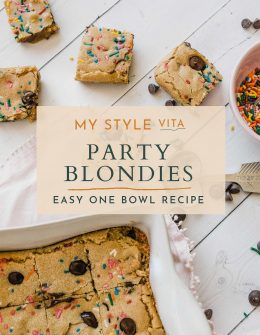 Like many of you, I’ve been on a major baking kick and can not be stopped. At least, until the flour and sprinkles run out. I’ve been adding sprinkles to everything I’ve been making in terms of sweets and these chocolate chip blondies are no different. Sprinkles make everything better and feel like a party instantly. So why not mix them into this delicious, gooey, buttery batter?

I’ve actually never made blondies until now. My favorite chocolate chip blondies are the ones you get on a long haul Delta flight. They’re absolutely delicious, gooey, but not too gooey. The perfect balance really. I tried a few different recipes of blondies. Some were too cake-like due to having baking soda and powder in them. Then I found Smitten Kitchen’s recipe and it was absolutely perfect. However, I used a 9×9 inch pan and think mine are too thin. I’m officially picking up an 8×8 inch pan for all party sprinkle chocolate chip blondies and brownies going forward.

The great thing about a blondie too, is that you can really add in whatever you like. I made my first batch with a ton of chocolate and realized it was too much for me. For my next trial, I did less chocolate. Better. Then for my third, I decided it really needed something fun. And I’m a MASSIVE sprinkle fan. So in went the rainbow sprinkles. They add a bit of crunch and color that these blondies so deserved.

How To Make Chocolate Chip Blondies

These super simple blondies are made in one bowl (unless you count the bowl you used to melt your butter in) and uses simple pantry staples. Also, you’re going to want to let these bad boys cool for a couple of hours. I know it’s hard, but it allows them to set up properly. I dug in far too early and they were a gooey mess and didn’t hold together. Still delicious, but just not as easy to cut and deal with for future enjoyment.

Preheat oven to 350º fahrenheit and then line an 8×8 baking pan with parchment paper and a little bit of oil spray or butter.

Melt your butter. Bonus points if you let it brown a bit, that never hurt anybody. Then add your butter to the sugar and mix until fairly smooth. Add in your egg, salt and vanilla. Mix. Then add in your flour until just combined along with your mix-ins. Top with a few extra toppings and sea salt.

Bake in an 8×8 pan for 20-25 minutes. Be sure to not overbake these. The edges should be turning light brown but it may look a tad undercooked in the middle and that’s fine. You want them gooey and they’ll continue to cook a bit in the pan when you let it cool.

Cut into squares and enjoy!

view all posts in Recipes