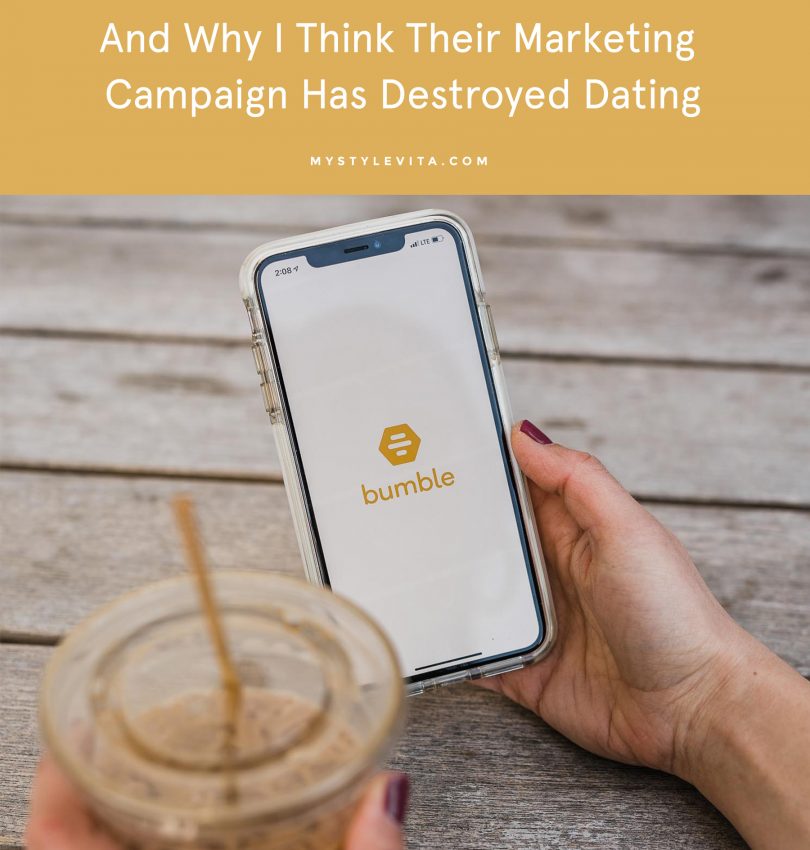 This letter is long overdue as I sit here on my couch on a Saturday night. Yes, I’m still single. And yes, I’ve used your “services”. But here’s the , I’m so done with you.

I’m 32, single, and am 100% a millennial. According to society, I should be on dating apps swiping left and and to be honest, it’s mostly left (that’s the negative swipe btw) just like my peers. But I’m not. I’m also not even bothering sitting at a bar or coffee shop in hopes that someone will come up to me and strike up a conversation. Why? Because Bumble has created a generation of lazy fucking men.

You heard me. Lazy. Fucking. Men.

Instead of having a set of balls to come up to someone to ask them out, this generation of men has been taught that it’s totally fine to sit around and just swipe to find someone. But here’s the kicker, THEY DONT EVEN HAVE TO MAKE THE FIRST MOVE. Wow, what a concept, right? You created an entire marketing platform on it and it worked to get women on it. But it also worked in manifesting a lazy generation of men who have no proper social skills, game or tact in asking women out.

How did this happen? Well, let’s chat about it…

My guess on what happened here was a perfect storm. First there’s the whole dating app in general problem. Where if someone isn’t PERFECT, you can just hop back on and find a new option for tomorrow night. This one I can’t blame you on since it all started with Tinder. This combined with the “women makes the first move” concept, you have thus created the ultimate opportunity for men to sit on their ass at home in their underwear, and women just come to them. We literally HAVE TO SAY HELLO FIRST. The man can’t even make the effort even if they wanted to.

This now translates and has crossed over to all social encounters in the wild. Instead of real conversations out and about, men (and women, we’re guilty too and that’s for another post about online dating in general) turn to their phones to put their best profile pic on display in search of getting laid.

The thing is, when we make the move first, we’re now stroking their ego in not one but two ways.

Two, we then “make the first move” which makes you feel like you’re being chased, you’re the winner, you’re the prize. Wow. Way to start things out, right? Now we’ve set the tone for this, likely never going to go anywhere, relationship.

This whole strategy of “women take control and make the first move” now makes men think we’re chasing them, we’re already into them and think they’re so attractive and amazing. This is how things get kicked off. Where does that leave the woman? I guess you can call me a “light” feminist, because although I believe in all the feminist things like equal pay, equal rights, my body, my choice. I do truly like when a guy grows some balls and makes a move first. Chivalry is soon going to be entirely dead, and although I like to open my own door, I DO want to be ASKED OUT. Or hit on first.

But thanks to Bumble and the supposed women empowerment marketing tactic you’ve used, we have just turned what Tinder initially destroyed in dating, to a whole new level. It’s simply created a lazy generation of men who can literally sit around and be hit on.

So how am I hoping to find a man? Well, the answer isn’t easy and maybe for another post. But let’s just say I will not be putting all my eggs in one Bumble basket.

You might also like … 7 Things I’ve Learned About Myself From Living Alone and Confession. I Feel STUCK And I Hope I’m Not Alone Here.